Annie has a Master of Public Health (MPH), PhD in Foods & Nutrition and BS in Biomedical Engineering, all from Purdue University.  She has been working with orphaned & vulnerable children of Southern Africa & designing service-learning programs for US college students & young professionals since 2007. Later, she lived in Swaziland, Africa & worked for Baylor College of Medicine's Pediatric HIV Clinic in Mbabane as a Visiting Scholar.  During this time, she facilitated the development of a national protocol on infant feeding pertaining to reducing the transmission of HIV/AIDS, volunteered at an HIV orphanage, & worked closely with the University of Swaziland's Nursing & Community Health department to assist with a nationwide community health needs assessment.
Since returning to the states, Annie consulted with domestic and African nonprofit organizations to increase global opportunities for US college students while simultaneously implementing sustainable programs that improved the lives for orphans living in child-headed homes.  Contact: anniefightspoverty@gmail.com 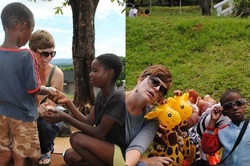 Kait received her Bachelor of Science in Art Education from Indiana University.  After graduation she headed west and taught a multicultural visual arts curriculum at an elementary school in southern Nevada for 6 years.  Wanting new challenges and a change of scenery, she moved back to her hometown of Indianapolis in 2007 and began working within the nonprofit sector.  Kait believes art can be related to all aspects of learning and is an excellent tool for understanding other cultures and customs.
These beliefs led Kait to Swaziland, Africa as the Art Director on a service-learning trip with Annie in the fall of 2010.  While in Swaziland, she witnessed firsthand the many opportunities to use art & design as a bridge to reduce cultural barriers.  Her passion is to provide a creative outlet for children that have dealt with great loss during their short lives and offer them hope for a brighter future. Contact: kaitfightspoverty@gmail.com

PRESIDENT:
Fikeveni Dlamini was born and raised in the Kingdom of Swaziland.  After completing a degree at the University of Swaziland in Agriculture, he continued his studies at Vincennes University and Purdue University in Environmental science.  He now works and resides in Lafayette, IN.  He has been helping with GHFP programs long before it's official conception and has delivered crucial advice in the past 4 years suggesting ways to implement difficult programs and networking with local Swazi people who have been able to facilitate the organization's mission. His knowledge of the social aspects of his people has helped GHFP interact in ways that are culturally acceptable.  Fiks is able to build on ideas due to his knowledge of what is feasible on the ground in Swaziland.  His time, knowledge and passion to help the orphaned and vulnerable children in his Kingdom are greatly appreciated.

VICE PRESIDENT:
Hyrum LaTurner holds a masters degree and PhD from Brigham Young University and the University of Chicago, respectively.  He holds experience in both administration as well as education with teaching experience at Kankakee Community and his current position as an assistant professor of Humanities at Prairie State College.  Dr. LaTurner is excited to use his connections in academia to build GHFP's network of volunteers.  He is currently engaging students in fundraising, awareness building, and recruiting for future service-learning trips to Swaziland.  He is passionate about engaging local youth in our fight against poverty and looks forward to serving as the GHFP board Vice President.

TREASURER:
Nicole Herlevic brings an eclectic background to the role of GHFP Treasurer.  She received her B.S. in Business from Indiana University and has since acquired over eleven years of professional accounting experience in a variety of roles during her time residing in the Chicagoland area.  Nicole started her career with a boutique CPA firm specializing in governmental and NFP accounting, where most of her time was devoted to auditing suburban elementary school districts.  She then ventured into the corporate accounting sector and eventually settled into a senior role in the finance department of a corporation specializing in the acquisition and management of outpatient surgery centers.  She served two years as Treasurer on her condominium’s HOA Board, which, as a member of its first elected Board, allowed her to gain valuable experience helping an organization expand in its early stages of development.  Although new to the non-profit arena, Nicole looks forward to contributing her financial skill set to the Board and her unwavering enthusiasm to the GHFP mission.

MEMBER:
Megan Kaser has been involved with GHFP since her first trip to Swaziland as an undergraduate student at Purdue University.  Since that time, she played a crucial role in forming the Purdue Student Chapter of Give Hope, Fight Poverty.  She served as president during the first year and focused on building a strong foundation for future years. She recruited all over campus, organized fundraisers for the club and for the non-profit, and built relationships with other clubs. The greatest accomplishment though was recruiting other extremely motivated individuals who were willing to continue to support the mission of Purdue-GHFP. Now, as a graduate, she continues to support GHFP through her role as a board member, managing volunteer alumni relations, and throwing fundraisers to insure program sustainability.

MEMBER:
Beth Pychinka received her B.A. in History from Indiana University. She completed a secondary education program from IUPUI, and she earned her master’s degree is from Ball State University. She comes to GHFP with an extensive background in public education. Beth has worked in high needs schools teaching high school English, and she currently contributes to public education as a high school administrator. Beth will use her extensive career in education to help bolster GHFP's education programs in rural eSwatini!

MEMBER:
Katy Scheuller received her B.A in Education with a concentration on reading in addition to a TESOL certificate from Purdue University.  She has been working closely with GHFP since her first trip to eSwatini in 2011 when she traveled as a Purdue student. She has been instrumental in fundraising over the last nine years with parties and events here at home. From afar, the kids have even impacted the lives of her family members. The organization has even become near and dear to her parents’ hearts, as have the kids who they love to watch grow and flourish from afar. Since that initial trip, Katy has returned to eSwatini three more times, several as a team leader. On these trips, she worked in orphanages, schools, HIV clinics, and in communities. She had the opportunity to help implement a sustainable feeding program, a solar energy program, a school library, and a school computer lab. She as able to meet with Swazi community leaders and create meaningful and long-lasting relationships with several of GHFP’s sponsored students. She believes education should be a right for all kids everywhere. The experiences also helped her bring a fresh outlook into her classroom teaching in America and help me to bring a more global perspective to her students. The kids in eSwatini are on her mind often, and she feels so lucky to have met them. She looks forward to continuing to work with GHFP as a board member!

MEMBER:
Kylie Dennis received her B.S. in Neuroscience from Indiana University - Purdue University (IUPUI). She became involved with GHFP in July of 2018 when she went on a service learning trip constructing pit latrine toilets in a rural village to reduce the infectious disease prevalence. The trip completely changed her life, and upon returning to school, she decided to start an official IUPUI GHFP student organization. She served as President for two years, and her favorite part about the club was hosting a Corgi Limbo & Costume Competition fundraiser! She is so excited and thankful to continue working with GHFP as a board member!